HJJ700 and HJJ900 family – Designed, constructed and manufactured in Germany

The high-pressure plunger pumps for water combine very high performance with a precision and state-of-the-art technology. A combination that allows the most exquisite Jet Jumbo plunger pump to replace existing high-pressure water pumps. HERMETIK has set the standards for high-performance displacement pumps for more than 40 years. The new third generation of the Jet Jumbo water pump series, precisely sums up achievements in design and engineering. Performance and durability are a cornerstone in the history of the HERMETIK Jet Jumbo brand.

At the heart of the new HERMETIK Jet Jumbo high-pressure water pumps are a completely reworked version of the proven HERMETIK Jumbo series HJJ213, HJJ 313 and HJJ 413 with flow rates of 160 to 1200 liters per minute and 120 MPa. They are equipped, for the first time, without gearbox and short stroke, allowing for lower plunger speeds and an efficient valve performance. A new technically advanced frame system on the pump and the electric motor centered and mounted, makes assembly and disassembly very easy and the alignment of the high-pressure pump unit is automatically guaranteed. A foundation is no longer required and the high-pressure pump set is placed on level ground.

The strong, compact design, which can only be realized with a revolutionary technology, results in a light and stiff water pump unit. To improve the weight distribution, the high-pressure pump is fully anchored and ensures a vibration-free run. The internal pressure lubrication supplies all bearings on the crankshaft, the treads and bolts of the crossheads and even the plunger attachment is hydrostatic mounted and lubricated under pressure. The high-pressure pump is divided into two sections, the engine and the pump head. The water side has two barrier media that prevent water leakage and lead into a separate electronically controlled system. The high-pressure head with plunger and valves is quick and easy to disassemble and can be replaced with a new high-pressure head. The new HERMETIK Jet Jumbo High Pressure Plunger Pump series for water is an excellent example of important advances in HERMETIK unrivaled technology application. For example, a modern, fully digital monitoring-oriented information on process displays, phones, laptops and IBA systems for the operator are among the innovations of this high-pressure water pump series. 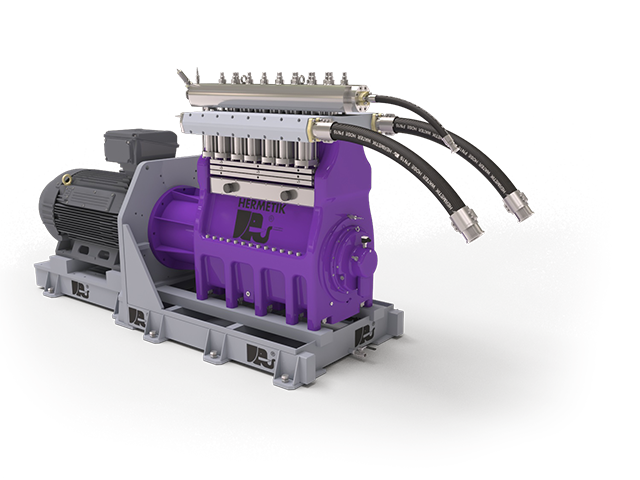 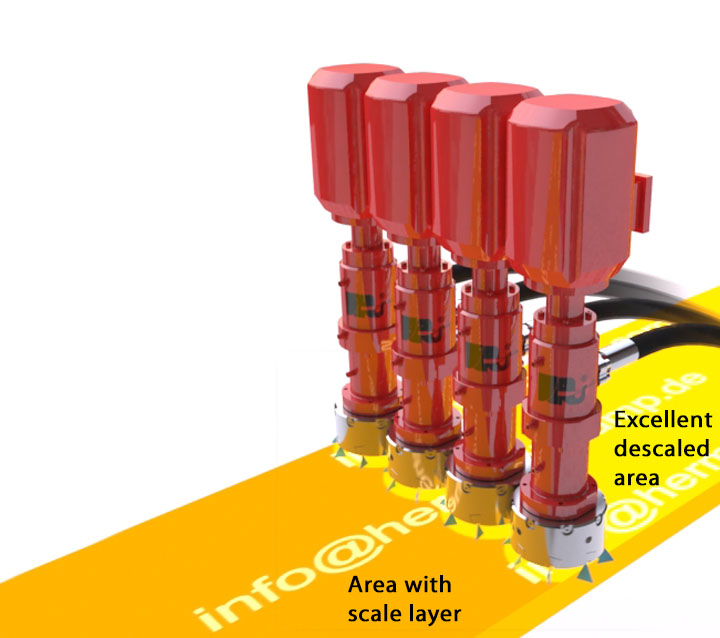 Great satisfaction in the quality department, while the production operator looks at the display of the automatic descaling of the scale washer, the height and width automatically adjust and registers the technical data of each individual rolling stock. This experience offers the most modern development in the HERMETIK surface processing in the rolling mill. HERMETIK has expanded and created an exciting new version in descaling. Providing superior 400 to 1500bar and low water flow, the HERMETIK Descaling Pumps with the new descaling nozzles provide the impact up to 20N / mm² when needed. In order to ensure the outstanding quality of the rolled stock, even with extreme metallurgical values ​​and tough tinder with silicates, the HERMETIK Descaling Cabinet offers the choice of exchangeable descaling nozzles on request and achieves the outstanding purity of the surface.

The scale washer in rolling mills for steel alloys

A fully automatic width and height adjustment as well as a controllable automatic start-stop system contribute to optimal descaling in rolling operation. Technology also supports operation, such as the multiple descaling overlap of the tiller, which detects both rolling speed, height and width, and provides optimal impact energy flow control.

The economic benefits are ¼ of the energy and descaling water consumption with a repayment of one year’s investment.